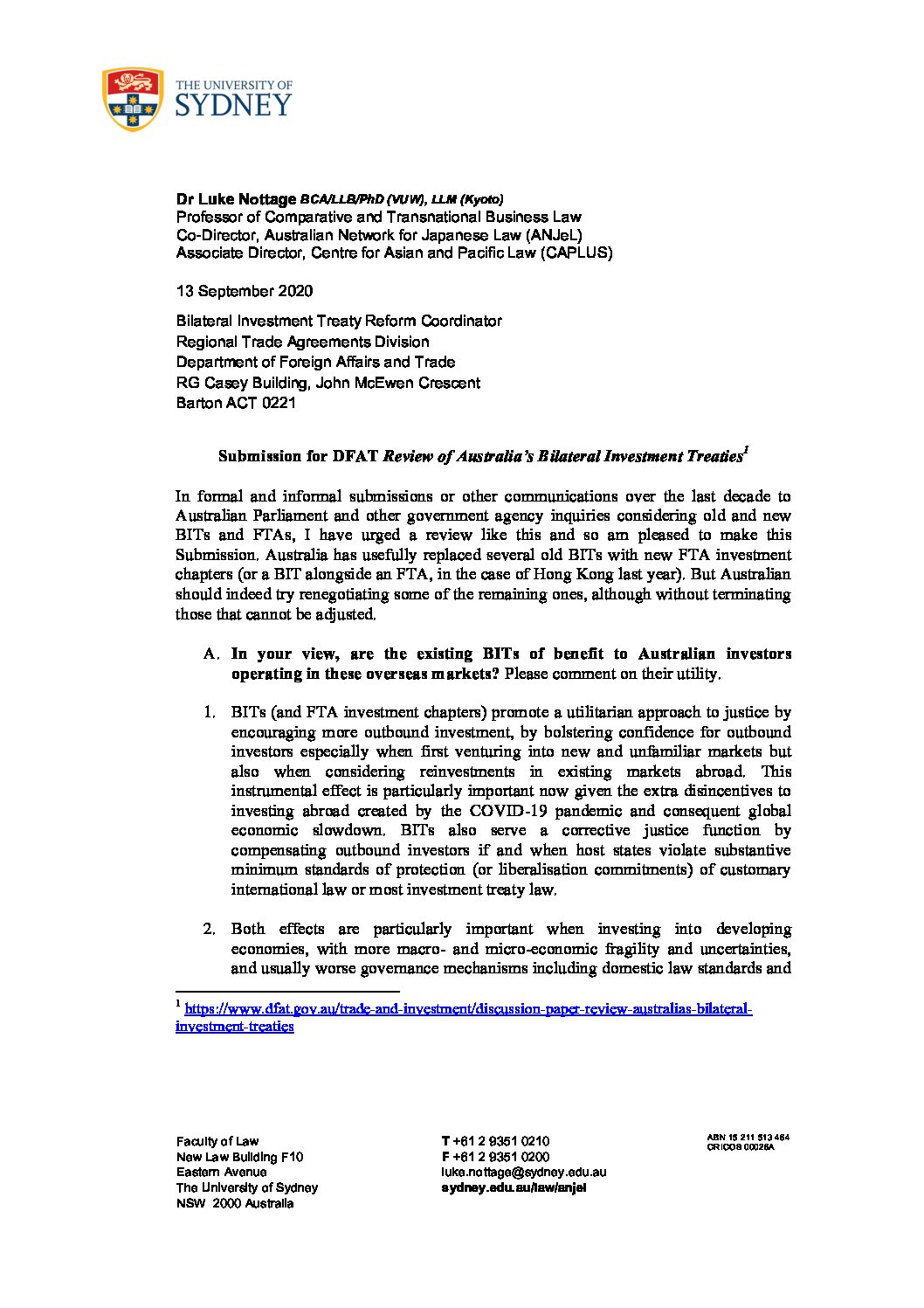 Australia’s Department of Foreign Affairs and Trade released a Discussion Paper for public consultations and called for submissions by end-September 2020 about whether and how Australia might review its remaining old BITs. My 15-page submission dated 14 September is expected to appear with others on or via the relevant DFAT webpage and is also available in PDF format here. It addresses DFAT’s “questions for consideration”, especially:

– “In your view, are the existing BITs of benefit to Australian investors operating in these overseas markets? Please comment on their utility.

– In your view, does the existence of a BIT impact on the flow of foreign direct investment and /or portfolio investment? Please comment, if possible, both generally and with reference to specific existing BITs.

– Do you have concerns about Australia’s existing BITs? If so, please comment on any specific provisions of concern.

– If Australia took the approach of re-negotiating at least some of the existing BITs, do you have views on which clauses should be included in a renegotiated agreement?

– In your view, would any concerns you have about any of Australia’s existing BITs warrant termination of one or more BITs? Please comment, as relevant, both generally and with reference to specific existing BITs.

– There are various models and approaches that different countries take in relation to international investment agreements. For instance, some models are concerned with investment facilitation rather than dispute resolution. In your view, is there a particular approach that is suited to meeting the interests of Australian industry and business

– In light of the various policy options available, what approach do you consider should be taken? Please comment, if possible, both generally and with reference to specific existing BITs.”

[Re-posted from the Kluwer Mediation Blog, and drawing on discussions during and after the Kluwer book related SCIL/CAPLUS/ANJeL webinar on “Beyond the Pandemic: New Frontiers in Asia-Pacific International Dispute Resolution” (4 August 2020, with video recording here). A related posting with Profs James Claxton and Luke Nottage is available on 5 September 2020 on the Kluwer Arbitration Blog.]

In recent years, mediation has been actively discussed for the investor-state dispute settlement (ISDS) regime, particularly as a means of reducing costs and delays. This interest is one reaction to growing discontent about the option of investor-state arbitration (ISA) typically offered by host states in international investment treaties, to make substantive commitments (like non-discrimination) more credible for foreign investors. Investor-state mediation (ISM) has been raised by some states in ISDS reform deliberations underway since 2018 through the United Nations Commission on International Trade Law (as mentioned recently on this Blog). In August 2018, the Centre for Settlement of Investment Disputes (ICSID) announced new draft ICSID Mediation Rules, in addition to longstanding but hardly ever used ICSID Conciliation Rules. These Mediation Rules will be accessible to States and investors irrespective of their membership to ICSID.

A year later, in 2019 the United Nations Convention on International Settlement Agreements Resulting from Mediation was opened for signature, coming into effect from 12 September 2019, and in principle can be used for ISDS. This Singapore Convention on Mediation does not differentiate between mediation and conciliation or any other dispute resolution mechanism resulting in settlements, as long as the procedure that resulted in such settlement agreements complies with the definition of Article 2(3):

“Mediation” means a process, irrespective of the expression used or the basis upon which the process is carried out, whereby parties attempt to reach an amicable settlement of their dispute with the assistance of a third person or persons (“the mediator”) lacking the authority to impose a solution upon the parties to the dispute.

Some recent treaty practice also reflects this growing popularity of ISM dispute settlement mechanisms. Unlike the older bilateral investment treaties (BITs) and even some newer investment chapters in Free Trade Agreements (FTAs), the newest generation of such international investment agreements (IIAs) often have express references to mediation and conciliation. However, even when they do, almost all IIAs only make such third-party procedures voluntary; foreign investors and host states would have to agree later and separately to try mediation.

Out of over 3000 IIAs world-wide, it seems that only two treaties – the Hong-Kong – United Arab Emirates BIT (HK-UAE) and Indonesia-Australia Comprehensive Economic Partnership Agreement (IA-CEPA) FTA, both signed in 2019 – provide instead for mandatory conciliation as a pre-condition to arbitration. However, under both treaties, conciliation becomes mandatory only for the claimant investor, not for the respondent state.

HK-UAE BIT has a three-tier dispute resolution system: amicable settlement through standard consultations (direct negotiations) during a specified cooling-off period, an additional conciliation step before arbitration (if requested by the host state), and finally investor-state arbitration through the relevant arbitration rules of ICSID, UNCITRAL or the Stockholm Chamber of Commerce. Article 8(3) stipulates:

When required by the Contracting Party, if the dispute cannot be settled amicably within six months from the date of receipt of the written notice, it shall be submitted to the competent authorities of that Contracting Party or arbitration centres thereof, for conciliation.

Initially disputants are allowed six months to try and settle their dispute amicably through consultations. Once this six-month period is over and if the dispute is not settled amicably, conciliation becomes mandatory (for the claimant investor) only if it is initiated by the respondent (the Contracting Party to the BIT). It seems the conciliation is then allocated another six months. According to Article 8(5):

If the dispute cannot be settled amicably within six months from the date of receipt of the written notice or from the start of the conciliation referred to in paragraph (3) of this Article, the dispute shall upon the request of the investor be settled by arbitration…

Therefore, unless the respondent initiates conciliation, the claimant can proceed directly to arbitration once the cooling-off period for amicable settlements ends. However, it is unclear when the condition of mandatory conciliation is deemed to be met: (a) whether the initiation of conciliation and its submission to competent authorities is enough; or (b) whether actual participation in the process is also mandatory.

The BIT is also silent on whether it is possible to cut down the additional six months for conciliation because the settlement is unlikely. One scenario would be where it becomes obvious from the beginning that the respondent had initiated conciliation with the sole purpose of delaying arbitration and has no intention of actually attempting to settle. Overall, this unilaterally mandatory conciliation step increases the total ISDS timeline by six months because conciliation is not integrated into the cooling-off period. Instead it represents an additional middle step. in between the existing amicable settlement and consequent arbitration.

Another multi-tiered ISDS clause, as unconventional as that of the HK-UAE BIT, is the ISDS clause provided under the IA-CEPA. Its uniqueness lies similarly in the unilaterally mandatory nature of conciliation (mediation), which the host state can make a pre-condition to the foreign investor proceeding to arbitration. Article 14.23 states:

A second interpretation is that these timeframes are overlapping. Specifically, if the notice of intent for arbitration is permitted to be given to the respondent during the consultation or conciliation period, then the 60- or 90-day waiting period  before commencing arbitration could be counted within these times. However, the treaty is not clear whether the notice of arbitration can be issued within the 180-day cooling off period and/or 120-day conciliation period, or whether the notice of arbitration can be given only after these stipulated time periods end (as under the first interpretation). This is because, while initiating conciliation is permitted during the consultations (Article 14.23), no such provision is provided for the notice of intent for arbitration (Article 14.26). Therefore, what can be said with certainty is that mandatory conciliation increases the overall ISDS timeline by (up to) 120 days.

In addition, like the HK-UAE BIT, IA-CEPA provides no additional information on whether it is permissible to have the 120 days of mandatory conciliation waived for the claimant if it becomes apparent that the respondent is not participating or when the settlement becomes unlikely.

Another important element to consider in IIAs when incorporating mandatory ISM is whether claimants can bypass the mandatory conciliation step through the most-favoured nation (MFN) obligation. This is when States are required to treat each other’s investors and investments no less favourably than they treat investors and investments of other, non-contracting states. Accordingly, claimant investors may invoke a treaty between the host State (respondent) and a different State (other than the home State of the claimant) which does not have a multi-tiered ISDS clause and that instead provides direct access to ISA. (Sometimes, however, the MFN provision expressly limits its applicability to later treaties signed by the host state with third parties.) IA-CEPA (Article 14.21(3)) and HK-UAE (Article 4(8)) doo have an express carve-out of ISDS from MFN, so an investor is not allowed to bring claims alleging the breach of MFN clause because any other IIA contains a more favourable ISDS provision.

Notwithstanding the recent steps towards promoting more ISM, the concept of mandatory mediation is still not widely practiced. Various commentators and practitioners have voiced concerns over the role of mediation in ISDS, even on a voluntary basis, which has sometimes progressed into arguments against the idea of mandatory ISM as a pre-condition to arbitration. However, my new empirical study, which examines the validity of common concerns against mandatory ISM through statistical and econometric analysis of amicable settlements generally among concluded ISA cases, has found that none of some commonly purported concerns were strongly significant in practice. For example, settlements do not pay less than awards, and settlements do not impede transparency of outcomes because the confidentiality of awards depends largely on the decision of the parties regardless of the outcome.

With the Singapore Convention on Mediation promising greater enforceability of settlement agreements, the new ICSID Mediation Rules being promoted for investor-State disputes, and an emerging trend of express references to mediation and conciliation in new treaties, it seems like the right time to explore the grounds of integrating mandatory ISM in the current ISDS regime. This would ensure the full utilisation of this dispute resolution step, which is unlikely to happen with current voluntary, opt-in references. Nonetheless, the two recent treaties analysed here highlight some issues of interpretation, including for timelines, deserving careful consideration by future treaty negotiators and drafters.